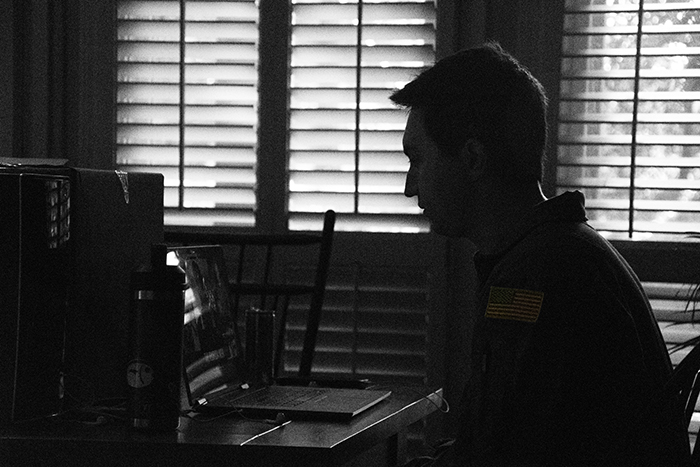 A US Air Force ROTC cadet meets with his wing of more than 200 others who are now separated by the global contagion as they try to maintain the camaraderie so necessary for the success of their studies and careers.

What is a low key photo? Well, a low key photo is simply a photo that has more dark tones than light tones. Many low key photos will have a lot of dark "negative space" around the subject. Deep shadows can also play an important role in a low key photo. Just like the other genres of photography, low key photos are all about the lighting but the elimination of light is just as important. The fact that only certain aspects of the scene are lit helps the viewer to notice the form, texture or lines that you want them to see. However, pay attention to your highlights. Just because most of your frame will be darker in tone, doesn't mean your highlights need to turn gray. You can have white whites still, so long as they make up a smaller portion of the frame than your darker tones. Also, pay also attention to the shadows! Do you want them visible, or do you want them totally "crushed" to black? Do the shadows help you to tell a story of drama and/or mystery? Low key photography is often used to show loneliness and despair but is also very effective in edgy portraits for both male and female subjects.