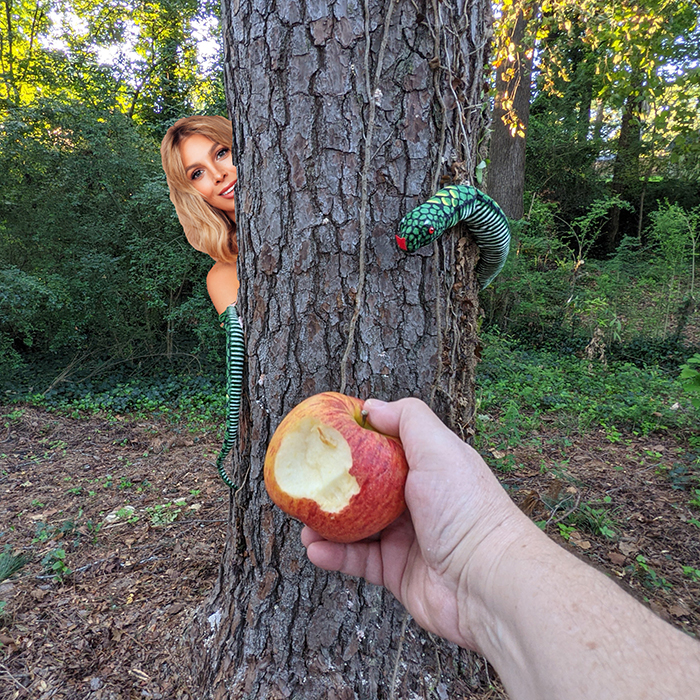 Every day I see Eve, then there was this one day...

So here is the first person's first person view of that eventful day that broke their routine. NB: I couldn't bare to ask any friends to be Eve so she is an iStock model. The arm is mine.

When the woman saw that the fruit of the tree was good for food and pleasing to the eye, and also desirable for gaining wisdom, she took some and ate it. She also gave some to her husband, who was with her, and he ate it. Then the eyes of both of them were opened, and they realized they were naked; so they sewed fig leaves together and made coverings for themselves. Genesis 3:6

This week, we're asking you to share with us. Give us a peek into a slice of your day. Who knows? Something that you might consider mundane and routine might well be thought of as being super cool by others. Share a moment of your day that makes what you do special - whether it's in the company of others or perhaps a moment of solitude far from the madding crowd. Consider letting in others into a moment that defines you - perhaps as you indulge in a hobby or passion - whether it's cooking, gardening, working out, painting or anything else that's part of the daily grind. It doesn't have to be something around the house or even indoors, but hopefully it's something you do on a near-daily basis. Show us the things that matter - maybe a family tradition, or a favoured nook or something you do consistently at a particular time of day. Just share and let us in. EXTRA CREDIT: First Person View