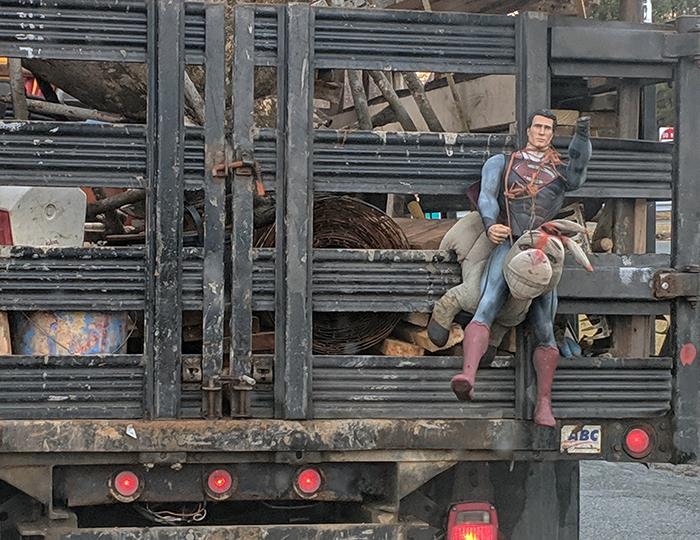 Superman riding a donkey on the back of a truck.

Nothing more than a very strange combination on the back of a truck seen near the Hickory interchange in Harford County, MD. How this came to be is a mystery. Its true meaning long lost. Its journey is long, arduous and dangerous. If only it could share it's wisdom from miles of travel.

This week, creative Framers, we have a challenge for you that will make you ignore the default view of things. As photographers, we are not merely the memory keepers of our family and friends’ worlds or the ones who accentuate the beauty of our world to everyone else. We are also the people who pay attention to the details that others often miss. We photograph and show them to people who are often amazed at what they have overlooked. As an exercise for ‘seeing’ the hidden or the unnoticed, we are going to photograph something that is uncommon. It can literally be something that is unique, such as an albino peacock, strange food, or somebody sunbathing in the snow. Or it can be something photographed at an uncommon angle – for example, lying on your back and shooting straight upwards at a painted ceiling or a meadow of flowers. A model can strike an uncommon pose or you can go all unreal on us and create an uncommon abstract photograph. You might even photograph a common subject but focus on something uncommon such as the tail of a chameleon, or the knees of an old man or maybe create an uncommon scene with a rabbit hopping along a beach!